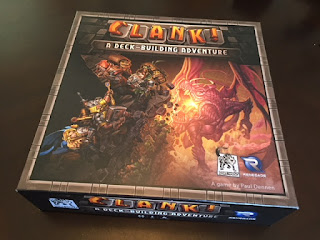 This weekend I gave the board game Clank! a go for the first time. Clank! is a board game with a deck building element in which the players are adventurers exploring a dungeon inhabited by a fierce dragon—their goal: escape alive with the most treasure!

As usual, I’m not providing a rules summary here but simply my impressions (in this case, after a single three-player game).

Components: The components of Clank! are nice. The illustrations are good and the game board is two-sided, providing a more advanced side for when players are more familiar to the game. Some cards contain a variety of numbers that could possibly be confused by players in cases when a card has a cost number, skill point number, and victory point number on it, but the designers have color-coded the various values for more clarity.

Style and Theme: The theme of Clank! is well done. The illustrations and chits and board all together are both functional but also evoke a somewhat light-hearted dungeon romp. The game board appears a bit dry to the view—mostly occupied by pathways and shapes that represent rooms—but I think any additional illustration or embellishment there would probably come at the expense of functionality.

The deck building mechanic is fun, and as a player what begins as a simply exercise playing a few cards grows as the game continues, adding more choices and card combinations. Likewise, there are many strategy options available to players—grab an easy artifact and rush to safety or risk delving deep? Purchase Market items to aid your play or forgo them? Concentrate on moving quickly or defeating monsters or building up gold? I love games that cater to different strategies and Clank ! manages to do this while still keeping the rules approachable enough that parents can play this with children.

At times the deck building mechanic took a bit of getting used to. My impulse when acquiring a new card was to think I could use it immediately, rather than folding it into my deck. Starting with a small “deck” of nine cards at the outset also means a bit of “deck juggling” to keep your hand, private discard pile, and private draw pile separate early on, though we did get used to this after a few rounds. We also ran into an issue where some cards tend to bunch up and the feeling that purchasing cards later in the game was likely purposeless because those cards would be unlikely to “work their way up” to the top for use before game-end. I think this last problem might be solved by having certain events, like dragon attacks, mandate that all players shuffle their private draw decks. 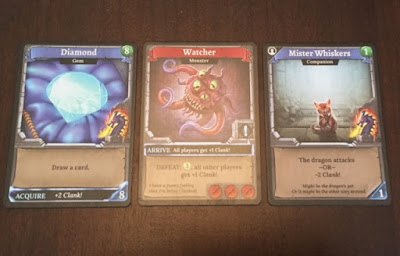 This game does suffer from what I find to be a common “Eurogame” issue—it’s hard to know who is ahead. In our game, all the players were fairly certain one player would win, only to be surprised to see that player come in last! Again, it’s a common problem among games in which you slowly accumulate victory points from different sources but I wish there were some easy way to track who was (generally) ahead.

Clank! adds a little bit of “screw your opponents” activity but not too much, which is good. The game never feels overly combative or mean-spirited and lends itself well to family play—indeed, it’s often your own decisions that come back to bite you in this game, and therein lies the fun.

This game also is a perfect example of the “push you luck” game type, balanced with lighter strategy options. Although card draws are random, the lack of dice kept things from getting too random— and playing Clank! I felt that if I won or lost it was primarily due to my own decisions. Some comparisons to the Adventurers games are warranted here, as both games involve a “get out alive with the most treasure” theme. Comparing the two, the Adventurers games have nicer bits, but I felt that Clank! makes up for the difference in more strategic gameplay. 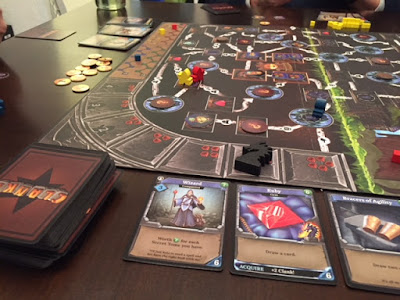 Final Thoughts. Clank! looks good, has a fun theme, and manages to present a variety of lighter strategic options while remaining very approachable. This game will definitely hit my table again. In addition, the design of the game begs for additional cards and similar expansions (as of this writing there is one major undersea expansion to the original game and a second stand-alone Clank! game set in space, but sadly no smaller card pack expansions). Clank! is a keeper.


Components: B+
Theme: B+
Gameplay: B


Overall: B+
Posted by Rick 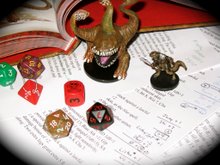